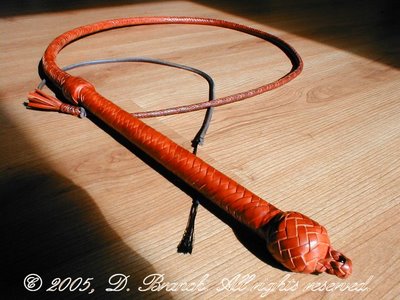 I have long been interested in whips. I saw them used as weapons in “B” movies in my youth long before Indiana Jones used them. They are part of the flexible weapons group in SouthEast Asian Martial Arts. There are variation of using stingray tails, quirts, crops, and full blown bullwhips. There is a Bullwhip vs Stick Fight on the Dog Brothers Real Contact Stick Fighting Series of Tapes/DVD’s. In the movie world Anthony DeLongis is frequently used a a whip teacher and choreographer. In the martial arts world the Sayoc International Group is well known for their whip technology. There are even martial competitions called “Whip Boxing” where two men compete with whips and protective gear. Here are a couple of links for your education.
Whip Blog
WhipBoxing