We Can Make Them Bigger 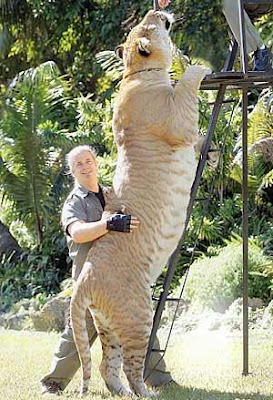 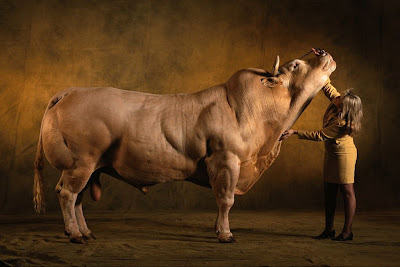 We can make them bigger. The Belgium Blue Bull is double muscled since it has been breed for genetic differences. This is from HIT-Jedi Dr. Doug McGuff’s Page www.ultimate-exercise.com.
“Dr’s Georges, Lee, and McPherron were able to show that double muscling occurred in these animals because they had undergone a mutation that deleted the gene for myostatin. Just like an albino lacks pigment because he doesn’t have the gene that codes for melanin, these animals lack normal regulation of muscle growth because they lack the gene that codes for myostatin.”

The Liger, (Napolean Dynamite’s favorite animal) is a Lion/Tiger Cross. The reason for it’s size is explained in Wikipedia.
“Imprinted genes may be a factor contributing to liger size.These are genes that may or may not be expressed depending on the parent they are inherited from, and that occasionally play a role in issues of hybrid growth. For example, in some mice species crosses, genes that are expressed only when maternally-inherited cause the young to grow larger than is typical for either parent species. This growth is not seen in the paternal species, as such genes are normally “counteracted” by genes inherited from the female of the appropriate species.

Another possible hypothesis is that the growth dysplasia results from the interaction between lion genes and tiger womb environment.[citation needed] The tiger produces a hormone that sets the fetal liger on a pattern of growth that does not end throughout its life. The hormonal hypothesis is that the cause of the male liger’s growth is its sterility — essentially, the male liger remains in the pre-pubertal growth phase. This is not upheld by behavioural evidence – despite being sterile, many male ligers become sexually mature and mate with females. Male ligers also have the same levels of testosterone ng/dl on average as an adult male lion. In addition, female ligers also attain great size, weighing approximately 700 lb (320 kg) and reaching 10 feet (3.05 m) long on average, but are often fertile.”

Soon we will figure out how to do this with humans. Are we ready for that?