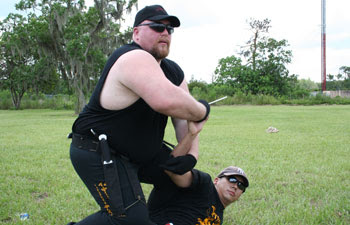 Let me start off and say, It is better to be in good physical shape, both with strength and cardio. And I would be a better fighter if those traits were better in me.

I’m overweight and out of anything that would be called good shape.

If I was to fight myself, my other self, who is just like me but in better shape, I lose. I can definitely lose in real life of course as well.

I am an advocate of being in shape, and have trained boxers to fight and wrestlers and pushed them to get in shape for competition.

With all that being said. I have in my many years of fighting in real life, in bars bouncing and on the street with no rules. And a conservative number would be in the 500 fights range. I have rarely fought anyone in worse shape than myself, and I have never lost one of these fights. So all those guys who were in better shape than me, LOST. In fact many of the fights started with the other guy saying something like ” You FAT F#@K, I’ll kill you!!!” And 3 seconds later crying that he’s had enough, that’s reality.

I have lost many competitions with the many rules and matched opponents. I’ve been knocked senseless by my boxing instructor and lost 1000’s of wrestling matches, counting practice matches, as well as real matches. Some of these I lost because I was out of shape. But that’s not reality.

Remember real life is different, there is no rule book, no bell, no ref to start it or stop it if you are losing bad. Most of these fights are won before they start, because of knowledge and tactics, sometimes intimidation and misdirection, superior weapons or weapon technologies, training, calmness that comes from experience, etc. Few fights go so long that cardio is a factor, I would say my one on one fights last an average of 3 seconds from first contact. As out of shape as I am, I can do almost anything for 30 seconds, ….more than enough time.

So does being out of shape make me a worse fighter, absolutely. Does that mean I can’t fight, absolutely not. Anyone who wants some can come to get it and find out.