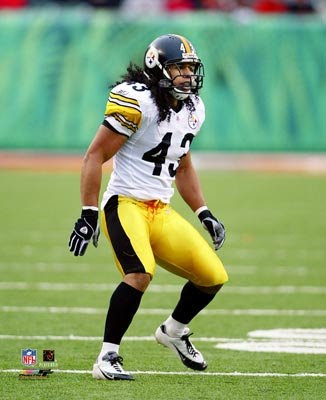 He’d get rid of Gatorade, the sports drink that is a major NFL sponsor and can be found in buckets on every team’s sideline and throughout training camps.

“I think that’s a whole money plot, you know what I mean?” Polamalu said after a recent practice at St. Vincent College. “I don’t understand how all that sugar can really help you. I think water’s the best, definitely, and I think some water’s better than other.”

Polamalu is a nonconformist in a conservative sport, where training has advanced in some areas but lags far back where he’d like to see it.

By NFL standards, his training regimen is radical. He does not lift weights and he trains in the offseason under Marv Marinovich, who became infamous as the father, strict dietician and trainer of former Southern California quarterback Todd Marinovich, a 1991 first-round NFL draft bust with a history of drug arrests.

Few can argue, though, with the style of training or the work Polamalu has done with Marv Marinovich. Polamalu made the Pro Bowl in his first year as the Steelers’ starting strong safety last season and developed into one of their top playmakers.

“He’s been so much on the cutting edge for years,” said Polamalu of Marinovich, whom he has trained under the past four years at his small Sports Lab facility in Orange County, Calif. “He’s been doing the same thing for 30 or 40 years. People are just now starting to evolve to his training methods. He’s been above and beyond when it comes to strength-training coach.”

Instead of free weights or machines, Polamalu uses medicine balls, heavy shoes, something called the wobble board and other nontraditional football workouts such as the single-grip hand ball to train year-round, even during the season.

He’s quoted on one Web site extolling Marinovich’s methods: “People have a hard time believing I could train for football using a heaviest weight of 20 pounds.”

Polamalu credits Marinovich’s methods for turning him into a Pro Bowl player.

“His philosophy is you can’t train slow to get faster. You can’t go in there and bench weights to think you’re going to get stronger. And, for example in the bench press, never are you going to lift that slow.”

Polamalu placed his hands to his chest as if he were bench-pressing.

“Never are you going to be this deep, because if you’re this deep in football, you’re going to get beat. His whole philosophy is training explosively, training with balance and nervous systems and things like that.”

No Steelers player and few in the game can match the burst of Polamalu, who received coach Bill Cowher’s blessing to pursue his training routine under the apparent belief that if it ain’t broke, don’t fix it.

“I think the human body, if you aspire to any regimen and are consistent with it, it’ll stand you in good stead,” said defensive coordinator LeBeau, who would not be surprised to see the Marinovich method catch on more in the NFL. “Everything has to start somewhere. But people usually reinforce success and Troy’s certainly had a lot of success. There’s no question he’s a supremely conditioned athlete.”

Marinovich ordered Polamalu to go home this spring when his weight dropped to 198, from 212-215 last season. He weighs only 203 today but says he’ll be back where he’s supposed to be by the season. And he expects to play better.

“I dropped maybe five or six interceptions,” said Polamalu, who led the team with five (one for a score), tied for second with 97 tackles and had one sack. “They would have been great catches, but if you want to be great you have to make those catches.”

LeBeau hopes to use Polamalu’s speed, size and burst to blitz more often this season.

“He’s very similar to when we had the situation with Carnell [Lake] and Rod [Woodson] — 200-pound guys who can really, really run. You can send him back as deep as you want and also blitz him, and that’s a nice combination for a coordinator.”

Maybe some day, Polamalu can convince a team to change the way it trains. He would hire chiropractors and massage therapists to take better care of their players, their investments.

“People are too scared to revolutionize, but that’s where you get great people.”