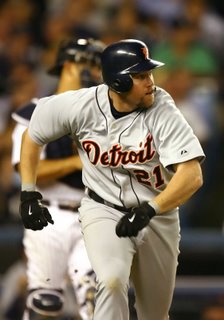 FIRST BASEMAN SEAN CASEY
“Casey came to spring training last year with added muscle, and the new strength was evident. He became quicker on inside pitches and was able to pull balls much more frequently for extra bases. At the same time, he retained his ability to take outside pitches to the opposite field with extra-base authority. Casey is one of baseball’s toughest men to strike out, with an exceptional knack for fighting off pitches. He hangs in well against lefthanded pitching, and though often aggressive early in the count, he has steadily improved in his ability to work himself into hitters’ counts.”

How did he get that way?? Check the Profile in the upper right that says, “About Me”.
He also had a world class friend and training partner, Sean McCarthy, and the support of a family. The harder he works, the luckier he gets.