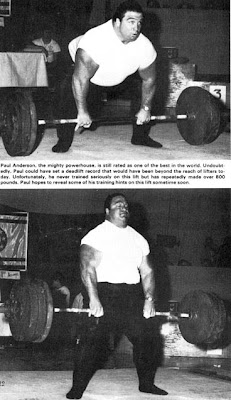 This is Big Paul Anderson later in his career. Notice he is alot harder and more muscular than in his Olympic Competition times. He was a professional and unable to compete with amateurs. He lectured extensively and toured the country raising money for his charities. In between travel and strength demonstrations, he would train and show up at Power meets to demonstrate that he was easily the strongest man in the world. He would usually surpass the world record lifts with these demo’s and occasionally do reps with the world record poundage. Note his grip and deadlifting style.