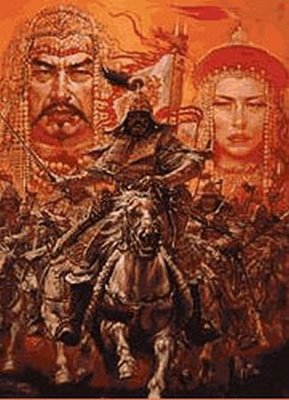 Dr. Michael Eades of “Protein Power” fame read a history book about Ghenghis Khan. Here is a quote about diet that may surprise you.
“The Chinese noted with surprise and disgust the ability of the Mongol warriors to survive on little food and water for long periods; according to one, the entire army could camp without a single puff of smoke since they needed no fires to cook. Compared to the Jurched soldiers, the Mongols were much healthier and stronger. The Mongols consumed a steady diet of meat, milk, yogurt, and other diary products, and they fought men who lived on gruel made from various grains. The grain diet of the peasant warriors stunted their bones, rotted their teeth, and left them weak and prone to disease. In contrast, the poorest Mongol soldier ate mostly protein, thereby giving him strong teeth and bones. Unlike the Jurched soldiers, who were dependent on a heavy carbohydrate diet, the Mongols could more easily go a day or two without food.”