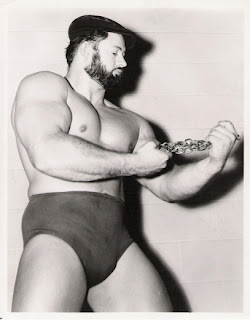 Dick Garza aka The Mighty Igor-

The Dearborn, Mich., native started bodybuilding as a teen-ager in Detroit and was named Mr. Michigan in 1954. He got into wrestling after punching out Brute Bernard while working out at a gym in Detroit. Promoter Burt Ruby heard about it and signed him.

“He was working out in George Jacobs’ gym on the incline bench with 120-pound weights when Brute Bernard walked past a couple of times and finally whacks him (for no reason apparently), despite Garza’s warning,” wrestling historian Mike Lano recounted of a 1998 conversation with Garza. “Garza did not like Brute. He was a bully who’d spit on guys’ steaks if he wanted to eat it. At any rate, Garza rose and clobbered Bernard on the jaw, laying him out. He’s layin’ there and he don’t get up,’ recalled Garza in his heavy Michigan accent. I thought I’d killed him.’ Evidently, Bernard lay unconscious for five minutes until Jacobs got him to come around. When he did, Brute was furious and demanded Jacobs get that SOB to meet me at the Park Avenue Hotel.’ Garza showed, Brute never did.”

Igor was managed for many years by the late Ivan Kalmikoff (Edward Bruce), who, as his spokesman and confidant, would take Igor from territory to territory where he would display his strongman stunts at matches, television shoots, shopping centers and fairs.

One of his favorite feats of strength involved a car.

“Richard would put his back against a wall, and his manager would get in the car and start the car,” recalled his wife. “Richard would keep it from crushing him by pushing back with his legs.”

He also lifted a truck on a pulley, broke chains, bent iron bars and had cement blocks broken over his head with a sledgehammer.