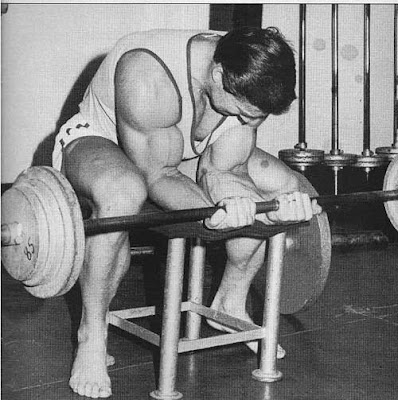 The Larry Scott wrist curl was done on a special bench. It was short so that you could get your hips below your arms when needed. It was close enough to the ground so that picking up a barbell was not uncomfortable. He did it with his thumbs UNDER the bar. He did a heavy set, then immediately a lighter set. He learned “Heavy” from Bill Pearl. Larry asked Bill how he built his incredibly strong forearms. Bill said, “Wrist Curls with around 225.” Larry asked him if he meant two twenty five pound dumbells. Bill said “No,…225 lbs on the Olympic Bar”. Now you have all the secrets. Special bench, heavy/light, thumbs under, and heavy, heavy, heavy.