Stop Being a Victim 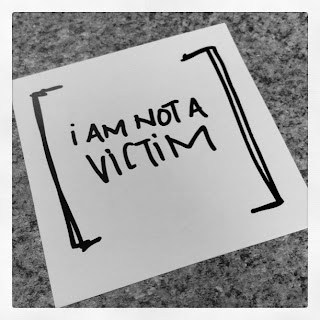 Nobody likes being called a victim, so it’s the perfect title to this article. Let’s start with some definitions and clarifying quotes. [I’m attributing the quotes to where I heard them, not to the necessarily correct source.]
“Victim mentality” is an acquired (learned) personality trait in which a person tends to regard him or herself as a victim of the negative actions of others, and to think, speak and act as if that were the case – even in the absence of clear evidence. It depends on habitual thought processes and attribution. Attribution is a concept in social psychology addressing the processes by which individuals explain the causes of behavior and events. -Wikipedia
“Definition of a victim: a person to whom life happens.”- Peter McWilliams
“Just World Fallacy” is the cognitive bias that human actions eventually yield morally fair and fitting consequences, so that, ultimately, noble actions are duly rewarded and evil actions are duly punished. In other words, the just-world hypothesis is the tendency to attribute consequences to, or expect consequences as the result of, an unspecified power that restores moral balance; the fallacy is that this implies (often unintentionally) the existence of such a power in terms of some cosmic force of justice, desert, stability, or order in the universe.-Wikipedia
“Life doesn’t happen TO you. Rather, it can happen BECAUSE of you. You have far more power and influence than you can possibly imagine. And once you decide, you can use your power to affect your own life as well as the life of the people around you.” – Dick Sutphen
“Enabling” is used in the context of problematic behavior, to signify dysfunctional approaches that are intended to help but in fact may perpetuate a problem. A common theme of enabling in this latter sense is that third parties take responsibility, blame, or make accommodations for a person’s harmful conduct (often with the best of intentions, or from fear or insecurity which inhibits action). The practical effect is that the person himself or herself does not have to do so, and is shielded from awareness of the harm it may do, and the need or pressure to change. Generally, individuals who enable others have weak boundaries, low self-esteem, and have difficulty being assertive when they communicate with others.-Wikipedia
“There are no victims without enablers” – Ita Koning
There is not a day that goes by when I fail to hear someone stating how circumstances did not allow a result to take place. Often, very elaborate “rational lies” are used to frame a series of reasons or excuses. We’ve all done it to one degree or another, but there seems to be a type of Zombie Apocalypse infection taking place. I think the growth of Social Media has turned ‘small towns’ into cyber towns and into a type of group speak.
The concept of personal responsibility is lost. Perhaps forever. NO ONE is to blame for their life’s path, unrealized goals or frustrating outcomes. No one is willing to step up and say, “I created the problem, therefore I can solve the problem. Really think about this. If you don’t have power over the result, then you can never fix it. If you own your outcome you can control your outcome.
That simple change of mentality is one of the most powerful tools in the Universe. If you want SELF HELP, look in the mirror and see, “SELF”. Then get off your ass and HELP.
In a recent Dr. Drew podcast with Lyle McDonald, Dr. Drew was pointing out, in so many words, how we demonize foods or macronutrients. Lyle replied, “We need an enemy, it’s a way to simplify things”, [not an exact quote]. That is a mouthful. What is the need to moralize EVERYTHING? Good politics, Bad politics,.. foods, exercise, governments, people, hormones, art, music, emotion. It’s absurd, yet it creates a cause that people who are not self governing can get behind. Much easier to follow a school of thought than to think on your own, isn’t it?
So, the pathway to NON victimhood is a simple one. Take responsibility, don’t apply morality to results/outcomes. View it as evidence and strategize change.
As per some victim-speak,….
Monsanto is evil — Yes, they created your double chin, third world debt and invented “Jersey Shore”.
The Illuminati controls the earth — I thought it was Iron Man, Reed Richards, Black Bolt and Dr. Strange sending Bruce Banner to Planet Hulk,.. but I could be wrong.
Gluten is bad — No actually it tastes good with deadly nightshades on top.
Western Medicine is evil — Make that speech when you sever an artery in a car accident.
Big Pharma is evil — About 50% of the population is sucking down Xanax like Tic Tacs it seems, LOL. Try dumping the Xanax, Valium, Ambien, Bio Identical Hormones and HRT for a couple months. Go ahead.
George Bush is evil — So?
Barack Obama is evil — And?
The Tea Party is evil — I agree. I’d like a “Coffee Party”.
Federal Reserve is evil — Isn’t this a building? Didn’t Bruce Willis save it in that movie?
And so it goes. Bottom line? If you don’t like the outcome, change your behavior. Quit whining.
Below,.. “The Victim”. A painting by South Florida artist, Robin White. 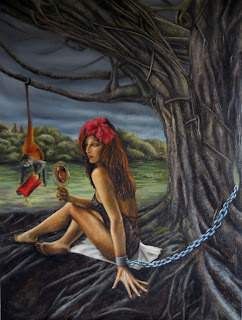