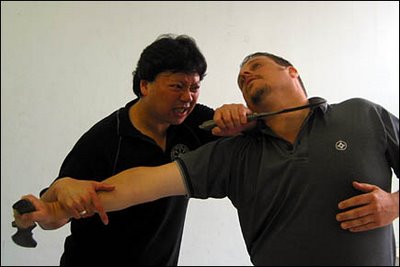 Every so often you will find a martial artist who actually listened to what Bruce Lee said. “Absorb what is useful, reject what is useless, and add what is specifically your own.” Bruce Lee also mentioned about martial art being a path of reduction. Doing the utmost to get the minimum. It is a shedding away process. This leads us to Ray Floro. His Filipino Martial Arts background is from the Illustrisimo Kalis and Lameco Eskrima flavors. He is also an accomplished Western Fencer. By sparring things out and finding out what actually works, he found, as Bruce Lee would say, the cause of his ignorance. An art form called “Floro Fighting” ($10,000 for advertising consultants to come up with that name!).
His art is based on efficiency, SIMPLICITY, and application. Learn it, spar it. If something comes along better than what you have, add it, but drop something as well. He is highly respected in Special Forces, security, and law enforcement circles. His reputation amongst popular martial artists like the Dog Brothers, Inosanto Academy, Sayoc Group, and Atienza Family is top rated as well. You can hardly go wrong by attending a workshop with this man. But remember, when he teaches you something,….he wants you to show it,..immediately.