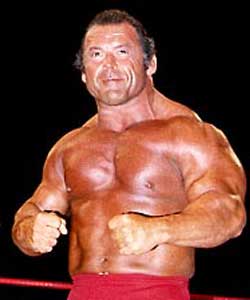 The power of the internet. I had a posted an article about Ivan Putski’s training and mentioned that I didn’t have current access to part two of an article by Dr. Terry Todd. Someone sent me the text of the article. I actually underestimated the work done by this incredible athlete. I also see that he squatted (bench) on Tuesday instead of Monday. No too bad since I read this in 1974 and that is over thirty years ago.
Read and digest.

LAST MONTH, we told you about our discovery in Texas of the astonishing young professional wrestler, Ivan Putski. We described a bit about his life, his wrestling showmanship, his strength stunts, and his gargantuan muscular development. This month, we plan to provide you with a detailed description and analysis of his training methods, his workout poundages and his diet. His approach to exercise is truly unusual and we present it not as a means for the average young man to acquire the size and strength of a Putski, but only as information.

As a matter of fact, we suspect that if the average advanced man in either bodybuilding, powerlifting or Olympic lifting were to attempt to duplicate this routine, he would have to be either hospitalized, buried, or locked away by himself. Putski approaches his training sessions in a more natural way than almost anyone we have ever known. He never has a pre-established program of sets and reps but, instead, he picks one or two exercises and does them until he is unable to perform then with approximately the same efficiency as when he began.

However, there are two additional factors in Putski’s training program and both of them are astonishing. The first of these is that he performs each exercise only once· each week. The second is that he goes to the point of failure on each set of each exercise. In other words, he only does pressing movements once each week, but on each set he keeps grinding out the reps until he finally can’t, as they say, get it up again. He will do set after set of bench presses until his strength is so depleted that he can’t co me very close to matching his first several sets.

It can’t be overstressed that on each set, he goes to the point of failure. After the 1 V2 hour session of bench pressing, instead of being given a blood transfusion in an oxygen tent as you might have guessed, he launches into what he calls his “pushes.” The way he performs them they are far stricter than 90% of the presses passed in the 1972 Olympic Games. He uses, sometimes, a slight dip to begin the drive overhead, but

when he forgets to dip the weight seems to go up about as well. He only recently begun to employ the push press but he is learning it under one of the real veterans of the Jack Woodson, who should provide such assistance In the area of technique. Whether Putski will follow Woodson’s advice concerning se reps, and routines can only be conjecture at this time but the combination of Putski’s raw strength -“Woodson’s hard-earned knowledge the lift would indicate that even the records of such a man as Ken Patera may soon be in jeopardy.

After this marathon, the once loud, strong Putski is transformed into the merest of zephyrs. But only momentarily for the wind returns soon to his broad sails and after catching a shower and pulling some clothes over his massive frame, he will stand up, -rub his hands over his tombstone of a abdomen and bellow, “Putski push, now Putski eat!”
And how he does eat. When he first began wrestling, he made less money and he had not yet acquired the typically American love of broiled beefsteak, so a usual evening meal would consist of a quart or two of raw oysters. a pound of cheese, some Polish sausage, and fresh fruit. As he began learning about U. S. cooking, he developed a taste for fried chicken and it’s not at all uncommon for him to eat 20 or 30 pieces after an evening bout. Lately, however, his pocketbook and his desire have led him more and more to good old American meat. When asked how often he eats it, Putski after being sure to get the correct gist of the question from his interpreter. Joe Bednarski, replied with a sly smile, “Morning, Putski eats it, noon, Putski eats it, night, Putski eats it. Putski loves!”
Tuesday, instead of taking a day off after the Monday marathon, Putski :~ trains his legs. The only weight exercise’s he uses is the bench squat but, as can be judged from the photographs accompanying these two articles, they seem to have adequately developed his thighs.
As a matter of fact, the weight world should all join hands in wishing that he never hears about the full squat because if he spent a year squatting all the way down everyone else would be driven by embarrassment to throwaway all their short pants. His legs are, without question, a combination of size, shape, and muscularity that we have never seen matched on anyone. They remind one of the legs of Grigori Novak, of Serge Reding, of Eduardo Andriana, of Chen Ching Kai, of Ron Lacy, but they seem to us to be beyond even these legendary legs. Both the calves and the thighs are incredible and they blend together perfectly. They look as Grimek’s legs would no doubt have looked had he trained slowly up to 280 pounds or so; and when we’ve said that, there ain·t no more to say.

The 15 sets of 10 are no exaggeration-in fact, he often does more. depending on how he feels. In the squat, he doesn’t go to failure each set because of the problem of often having no spotters, or having inexperienced spotters, and the 650 is obviously not his limit in this exercise. “If the weather is good on his leg days, he will go to a local fool ball stadium after squatting and run the stairs for an hour or so, springing up the stairs like a 270 pound mountain goat, walking back down and then immediately bounding back up again, 20 plus inch calves bulging in the sun.
After two days in the gym like Monday and Tuesday, you’d figure like we did that old Putski would be out of gas but, like us, you’d be wrong. Putski seems never to be out of gas. Wednesday, he’s back in the gym again. This
Time to punish his arms. He uses either the standing barbell curl or the seated concentration curl with dumbell and he uses 200 pounds and 100 pounds, respectively. In order to save space, let us simply say that he docs around 15 to 20 sets of 10 in the curl. After he curls, he works his triceps using, either the lying or the standing triceps press with barbell. He also uses around 200 pounds in this exercise, and knocks out 15 to 20 sets of 10. In each of the four exercises, he uses quite strict form and he goes to the point or failure or “loose performance” in ” each of the individual sets.
After his Wednesday workout, he “rests” until the following Monday, if you consider wrestling almost every night and eating Polish sausage and women resting. When asked through his interpreter his basic training philosophy, Putski spread his huge neck and threw out his oil drum of a chest and smilingly replied, “Push! Eat! Rest’ Have Woman'” We find this hard to dispute,
Putski is so enormously muscled and so brutally strong and enduring that it is perhaps selfish to suppose what he might have done in lifting or in bodybuilding had he early on come under the tutelage of an advanced coach. It’s not hard to Imagine that had he stayed in Poland he might have become the World Heavyweight or Super heavyweight Olympic Lifting Champion. what heights he could have reached in bodybuilding will never be known, but he is genetically blessed with a bone structure and metabolism of such truly Herculean dimensions that they are matched by almost no one in our memory. What his back would look like if he specialized for awhile on pulling movements, lat work and deadlifts is difficult to imagine, and what strength he might have developed in the powerlifts, particularly the squat, had he trained for competition, is almost beyond comprehension. But fortunately, we don’t have to waste our time in idle speculation about what he might have lifted or how he might have looked, because the Putski that does exist is sufficiently phenomenal to make it worth your while when he wrestles in your area to go out and see him flip opponents around like rag dolls, crush corrugated metal drums, have rocks broken across his stomach with a sledgehammer and, mainly, just see him.