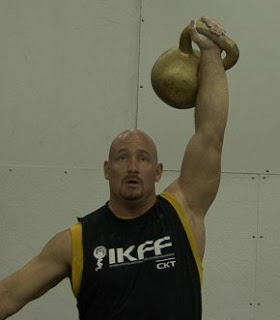 Months ago in a much guarded exchange of messages legendary strongman and entertainer, Ken Blackburn of Michigan, had two questions for me. “Do you know of a World Class facility in Ft. Lauderdale to hold an IKFF Certification? AND Where the HELL did you get that haircut?
Fortunately for me, I had two answers, “Yes, Playground Gym, and some bum named MethMouth Pete.”
Ken’s fearless attitude of holding a Cert on Superbowl Weekend is built upon years of boxing, kickboxing, karate, Brazilian Jiu jitsu, and break dancing.  Steve Bowser of both Crossfit Affliction and Playground Gym was the host. He’s known as the primary body double for Vin Diesel, and the artistic director of the music video, “Total Eclipse of the Heart” by Bonnie Tyler.
Ken arrived in Ft. Lauderdale without his usual entourage of yes-men who remind you of the Memphis Mafia in their prime. Instead he was escorted by his provocative, scintillating girlfriend. Her order of the day seemed to be wiping sweat from Ken’s forehead with women’s panties and immediately posting them for sale on EBay. Later that evening Ken’s persuasive personality, NLP training, and charm convinced her that eating sushi off of strippers was a, “.. Ft. Lauderdale tradition,.. and when in Rome,…”
The Cert itself was very good. I read a previous review by Internet Legend Steve Shafley. I knew what to expect, but Ken’s material has advanced. Input from European sources, Russian sources and his own detailed training template were presented in a calm, but humorous manner. I’ve known of Ken’s work and watched him compete at the World Championship Level. It’s always exciting to see growth and his development is amazing.
The day started with extensive joint mobility and warm ups. Ken wanted everyone to know not just HOW, but WHY. He’s training teachers here, not developing a fan club. Extensive theory on body alignment, breathing, muscle activation, controlling heart rate, and the mental game are just the tip of the iceberg in the vast teaching outline of the IKFF. Ken demonstrated the material in manageable chunks, then delivered it in a step by step process with each component building on the other. The attendees then rehearsed each step, asked questions and were given corrections. The delivery was direct, with much respect and humor. There was NO punishment dolled out to amuse or diminish people. Ken’s focus was on making you better, period.
Short breaks were used for questions and the pace was brisk, but manageable. Ken repeated the much welcomed announcement that the IKFF developed relationships with follow up and provided ample educational support in the form of online videos, PDFs, and posters.
Day Two started with an old cassette player hammering a tune from James Brown and the Fabulous Flames. Ken came skipping out amongst the crowd handing out posters of Steve Cotter, descending from his Italian Villa, posing on the beach in a singlet, with a rose in his teeth. [Word has it that the Italian lifestyle and diet has changed Steve. This photo appears to be evidence.] 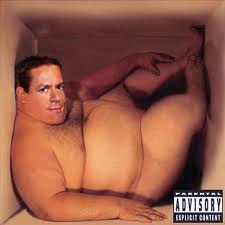 But I digress. Ken’s moves brought down the crowd and blew the lid off the dump. Not since Wayne Cochran, back in the hey day of Miami, has anyone seen such a display of athleticism and boyish charm. It showed once and for all, the power of the kettlebell, and the methodology of the IKFF. 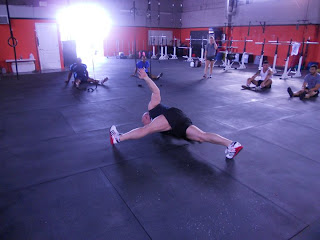 The standing ovation was punctuated by five minutes of Ken holding a double bicep pose and kissing his own arms. Luckily Steve Bowser threw a cold bucket of water on Ken and we got back to business.
The squat was taught from the mobility and range of motion, to posture and corrective measures. This is sadly lacking in many competition only programs but is a mainstay in developing the total athlete in the IKFF mold. Short breaks with amply hydration kept the crew energetic and ready for their testing.
The technical test and review is detailed and not a pencil pushing drama. You do it, explain it, correct it, and do it again. Then comes the physical testing. This is the physical test as designed by Steve and Ken and it tested the immortal flesh and Wolverine like skeletons of kettlebell hostages. Stopwatches were set, chalk was liberally rubbed, and everyones life flashed before their eyes. And EVERYONE passed. Ken was so excited he got the vapours and in a minute of confession told the crowd that he clenched his buttocks one thousand times per day. It was something we really didn’t want to hear.

An extensive question and answer period followed. Ken explained programming, the interactive relationship of the IKFF,  and how to promote competitions, workshops, online coaching, and kettlebell sales. His willingness to GIVE was overwhelming.
I’d highly recommend this Cert to anyone, but remember, it will be updated, improved, and even smoother. Getting better day by day works for kettlebell training and for the IKFF. I’m proud to call both Ken Blackburn and Steve Cotter friends and associates. I’m happy that Steve Bowser of Crossfit Affliction and Playground Gym is one of the most open minded facility coaches in the country. This was an enjoyable, informative weekend. The group who attended was strong, intelligent, and receptive to quality training. Here is but a glimpse of the Ken and Steve show.