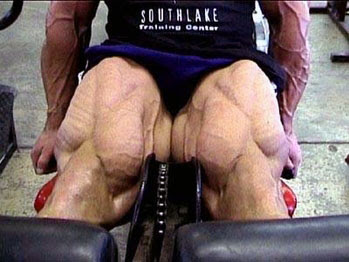 Some years ago there was a talk show which presented at that time, some celebrities and athletes who were famous for their fitness and appearance. Included in the panel was Football Player, Herschel Walker, and former Miss Olympia Rachel McLish. Someone in the audience upon viewing a photo of Herschel Walker’s physique, asked, “What do you do for your abs?”. He replied, “About 3000 abdominal motions per day, it varies, but that is pretty standard.” This drew some oohh’s and aahh’s from the crowd. Rachel McLish positioned herself for a reply. No doubt she felt that Herschel had tossed out a number that no one could attain and therefore would scare away potential customers from the fitness boom of the 80’s and 90’s. She reported with much vigor, ” You don’t have to do thousands of reps and hours of exercise, to stay in shape!”. She continued, ” I workout about 45 minutes 4 days per week and can do 300 pound calf raises as well!” Herschel smiled and returned fire, ” You have it all wrong, Rachel. I’m not doing 3000 crunches to train my abs,…I’m training my MIND!” He then stated his “concept” of fitness. ” I am in shape for everything. That is the definition of being in shape. I can play football, basketball, and run track. I can do these things because I want to and my mind is connected with my body” (Note, Walker stated in a phone interview on The Jim Rome Show on November 20, 2006 that he still performs 2500 situps and 1500 pushups every morning. He has been going through this same routine every morning since high school.)

Tak Kubota is one of the highest ranking Japanese Karateka in America. He is known for his incredible punching power. He has trained many champions and celebrities including actor James Caan. Early in his career his students exposed him to weight training. Kubota had only done traditional karate exercises. He did thousands of punches, thousands of kicks, stance work, breathing exercises, and karate based calisthenics. One of his student had Kubota try the bench press. Remember, at this time, he weighed about 160 lbs. at 5-6. Kubota managed a 280 lb. bench having never handled a barbell. His student said, “Kubota never thought of himself as less than strong,…he always believed he was powerful.”

There is mindless activity, and mindful activity. If you go to a health club and watch almost everyone these days,…they are watching TV or listening to Ipods. There seems to be little thought going on to what they are doing, whether it be their motions, mechanics, or effort. The training seems to be something that they know is good for them, but they have to divert their attention elsewhere since they deem the activity boring, or wasteful. Contrast that attitude with those that are mindful of their motion. They take that trip within themselves. That voyage inside to carve a mind and body pathway, to broaden the path, clarify the journey, and enhance the connection. A former training acquaintance, saw Arnold Schwarzenegger doing concentration curls. Arnold’s way was not the normal way. Arnold was anything but normal. Instead of resting his upper arm on his inner thigh while seated, The Oak would stand and let his arm hang free. He braced himself on the dumbbell rack as well. He kept his frontal deltoids locked and his upper arm vertical. He would curl the dumbbell up with a minimum of momentum and at the top of the curl, he would collapse his wrist to enhance the tension in his bicep. This type of specific action was not a result of “getting in his numbers” or simply “working arms”. It was a vivid demonstration of his mind’s ability to connect directly to his body and make it do what he wanted. That is why he is Arnold.

At a Rickson Gracie seminar some years ago, several of the attendees asked about Rickson’s training and diet. He commented that he always stayed in shape. He simply connected to his body and did the necessary work to stay in prime condition. He would adjust his diet so that it operated at a high level all the time. He might have to defend his family, fight a challenger, or simply save someone drowning as he ran down the beach. He said that he included some red meat in his diet since it made him more aggressive for competition, but once he decided not to compete, he would eliminate it. He said that he had perfect control over his diet and exercise by just deciding to. He was that connected.

Olympic Medalist in the Marathon, Frank Shorter said that between 1970 and 1980 he averaged 17 miles per day of running. This meant taping his feet since he had collapsed arches. For one thing, he said he did it because he enjoyed running. The second thing was that he was into it mentally. In fact, later in his career he adopted the exercise bike to minimize orthopedic trauma. He found it useless to look at TV, or anything else while biking. He had to turn the bike to face a blank wall, and connect his effort with his thinking without distraction.

Rather than focus on what the body is capable of, focus on what the mind can mold. Everyone talks about a mind/body connection but how many actively pursue it? Do they actually and forcefully THINK as they train or set goals? Do they clear the mental rubbish and disorder to have a clean working area for internal communication? Do they train with distractions, either internal or external? Go inside and ask yourself these question. Develop a task list and do what the best have already done.