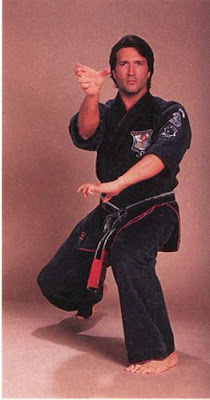 Jeff Speakman was an Ed Parker protege who combined his acting with his fighting skills to break into show business in “The Perfect Weapon”. Jeff was a private student of the Grandmaster of Kenpo later in Mr. Parker’s career. Jeff is a uniting force in the Kenpo world, attempting to get together many of the “Old Guard” Kenpo masters. He is formulating Kenpo 5.0 which combines his Parker methods, his current study with Master Ron Chapel of Sub-Level 4 Kenpo, and Kenpo-Jutsu’s grappling roots. Here is an older interview.
Here is Jeff’s web page with a great video CLIP
And below is the famous clip of Jeff working out in “The Perfect Weapon”.