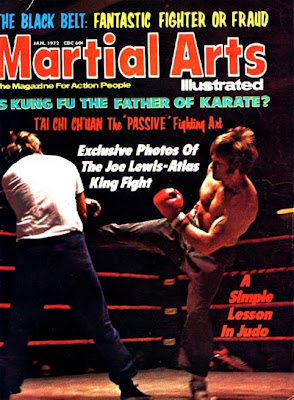 Joe Lewis was one of the greatest Karate champions of all time. He did wrestling and weight training in his youth, then joined the Marines where he studied Karate. He studied with several Okinawan masters and combined with his intellect, heavy front squats (his favorite exercise), 190lb curls and 405 Bench Press, he obtained his Black Belt in 7 months. His sparring partner in Karate was John Korab, a boxer. He also trained stateside with Gordon Doversela, boxer Joey Orbillo, and Bruce Lee. He introduced Kickboxing to America by knocking out Greg Baines in the second round in his first match. I read about Joe’s workouts in Professional Karate Magazine in the fall of 1973 on a trip from the Pittsburgh area to Buffalo, New York. Our group was going to a tournament where Wally Slocki of Canada had a retirement match against Billy Blanks of Erie, Pennsylvania. The interview in the magazine had Joe describing his 9 times per week workouts. He sparred daily, and a had specific regimen for power. He kicked the bag with his famous sidekick with his left leg for one half hour, then turned around and did it with the right leg for another half hour. He went by the clock. Then he hit the makiwara pad for at least 1000 strikes per day. He focused his lifting on his leg muscles, and spent time on his upperbody using the heavy bag and doing lots of knuckle pushups, leg raises, and situps to toughen his body. He developed footwork working with boxers and spent time developing his ‘Gi’-grabbing techniques by adapting Bruce Lee’s Lop Sau variations. He further adapted his boxing blended with karate by working extensively with Joey Orbillo and John Korab. Apparently it worked since he once hit a 6 foot 7 inch, 270lb opponent so hard that he had a stroke and went into a coma.
I digested this material like a great meal and went out to my garage to punch my canvas sack filled with chipped plastic. I kicked until I couldn’t lift my legs then I punched till my knuckles split and bled through my hand wraps. I did weighted step ups, leg curls, leg extensions, and pullups alternated with knuckle pushups. Joe Lewis said you had to understand pain and that you could tell what a champion was made of by how he trained. I understand that to this day.