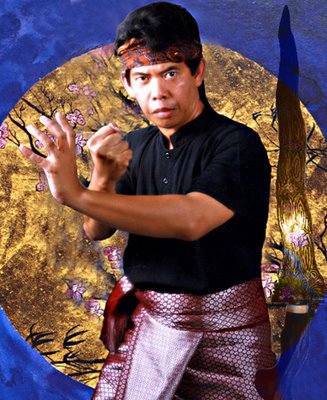 I had the opportunity to attend a Herman Suwanda seminar some years ago with one of my silat instructors, Harold Koning. Pak Herman was an incredible practitioner who held deeply the responsibility of helping his own people, and spreading his art of Mande Muda (”new child, or new river”), to the Western world. He continued to train with many Guru’s in Indonesian to continue the growth of his art. Mande Muda is a systemic fusion of between 18 and 24 silat styles. Rather than be a practitioner stuck in the past or clinging to tradition, Pak Herman would regularly grapple with Shooto and Brazilian Jiujitsu players to sharpen his game. He would allow an entire class at the Inosanto Academy to cinch him up in their favorite submission, only to wiggle out and ask for the next one in line. His father would have Herman engage in sparring and streetfighting against more mature practitioners to expose his son to the reality of combat. You can check out the family history HERE. And below is a short clip for Pak Herman showing some silat groundwork and possible lines of movement.