Got Milk? Well no you don’t. 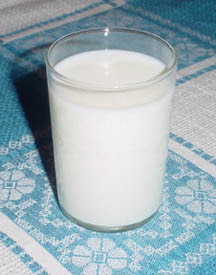 This is from ScientificAmerican.com . Thanks for the tip from Art Devany.

In what they claim is the first direct evidence of the evolution of lactase-persistence (the ability to digest milk and other dairy foods), German and British researchers came up empty in their search for the gene variant that allows over 90 percent of northern Europeans to gulp down and properly digest milk. In many others around the world, lactose causes diarrhea and bloating, especially in adulthood.

Lactase persistence (also called lactose tolerance), the continued production of the enzyme lactase that breaks down the sugar lactose in milk, correlates heavily with populations currently or once based on dairy farming, estimated to have begun in Europe roughly 8,000 to 9,000 years ago. (Populations in the Middle East and northeastern Africa also have the ability to digest milk.) “There’s pretty good evidence that it’s the most strongly selected single gene variant in Europeans in the last 30,000 years,” says Mark Thomas, a genetic anthropologist at University College London and co-author of a new study in this week’s Proceedings of the National Academy of Sciences.

Thomas, along with a team of scientists from the University of Mainz in Germany led by paleogeneticist Joachim Burger, searched for the gene variant that confers lactase persistence in most modern-day Europeans in eight samples from the skeletal remains of Europeans who lived during the Neolithic era along with one sample from the Mesolithic era. The Neolithic relics were carbon dated to between 5,000 and 5,840 years ago, while the Mesolithic remains date back almost 4,000 years. The samples were found in locations ranging from Germany to Lithuania.

According to the study, the ability to process lactose was not highly prevalent in the Neolithic era. In fact, the researchers did not find any trace of the gene variant in their samples. The total absence suggests that no more than about 40 percent of the population could possibly have been lactose tolerant 5,000 years ago—indicating that the ability to digest the milk sugar probably resulted from the advent of dairy farming.

“Eight thousand years, in evolutionary terms, is nothing, especially when a genotype frequency raises from close to 0 up to more then 70 percent and, in some areas of northern Europe, [to] even more than 90 percent,” Burger says, adding he expected to find that some individuals were lactase-persistent. “The fact that we have found none demonstrates that positive selection was acting massively on prehistoric European populations and that the speed of the spread of the allele (gene variant) was enormous.”

About 80 percent of the people in southern Europe now are lactose intolerant, which means that there was a relatively small window for the gene variant to have come into prevalence in northern Europe. Burger says he will study more populations in Eurasia to try to determine when the gene variant spiked in frequency. Thomas, on the other hand, plans to integrate these findings “into a full population computer simulation to try to understand the spread of farming, dairying and other population movement.”

Sarah Tishkoff, an evolutionary geneticist at the University of Maryland, says that the new work highlights the potential of tying the findings of genetics and archeology together. She warns, however, that, “one of the limitations of doing ancient DNA work is the difficulty of obtaining enough nuclear DNA to look at large numbers of samples to determine differences among populations.” She adds that going forward, analyzing a few samples from the same area and period of time may better hone the ancestral frequency of this gene variant.