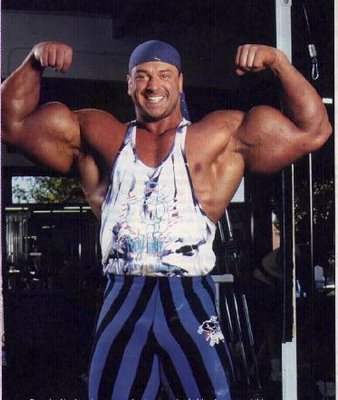 Manfred Hoerbel is one of the most colorful characters in the world of strongmen. He is from the same area of Austria as Arnold, (something in the water), and has a larger than life personality as well. Here is an interview that appeared in Muscle and Fitness some years ago.

THE WORLD’S BIGGEST ARMS!
Can Anyone Out There Match Manfred Hoeberl’s 25 1/2-Inch Guns?
By Bob Wolff, Editor at Large

Manfred Hoeberl recently visited Weider headquarters in Woodland Hills, California and gave Joe and a group of us from muscle & fitness and flex a dramatic demonstration of just how powerful he is.

Taking a full soft-drink can, Manfred wrapped both hands around the metal container. With a loud yell, he squeezed his hands together and blew the top off the can! Soft drink distributors estimate that it takes nearly 600 pounds of force to accomplish the feat. Manfred did it in two seconds. Then, he did it again with another full can just because we enjoyed it so much!

You wouldn’t believe me if I told you. To think that a human being has 251/2-inch muscular arms! Is this some cartoon figure or figment of one’s imagination? Until I met Manfred Hoeberl of Germany, I thought so.

I’ve got to be honest: I’ve seen up close just how big the biggest of the pros’ arms are. Mike Matarazzo and Paul Dillett’s arms were the biggest on the scene – until Manfred Hoeberl visited the States. The German giant’s arms dwarf Mike’s and Paul’s most pumped-up guns by over 2 inches – cold!

To give you an idea of just how big Hoeberl’s arm is, picture an average bodybuilder’s thigh. Wrap a shirtsleeve around it, and that’s the size of Manfred’s arm! Many guys have been proud to show me their 19- or 20-inch arms. But, no one can claim 25 1/2 muscular inches and be legit! Except Manfred.

In fact, Manfred is so strong that he regularly competes all over the world in strongman competitions. In 1993, he claimed the title of Europe’s Strongest Man.
How did this 6’5″, 330-pound gargantuan, who does chin-up reps with a 200-pound weight strapped around his waist and reps with 660 pounds in the deadlift, slab 25 1/2 inches of grade-A beef on his arms? I couldn’t wait to find out.

“My arms have always responded well to training,” Manfred says. “Of course, lifting in the strongman competitions has forced me to use muscles I never knew I had. This has forced my arms to become bigger.”

I prod Manfred to give me an idea of how he uses his shirtsleeve busters in those competitions. “Strong and powerful arms are definitely a necessity for some of the lifts,” he says. “For example, I did a demonstration on a television show in Europe where I turned over 10 cars in three minutes and 20 seconds.”

What if you don’t plan to upset cars, but just want to add more size to your arms? “It’s simple,” Manfred says. “Train arms hard but give them a lot of rest. Use exercises that develop all areas of the biceps and triceps, and train heavy only when you are 100% focused.”

THE SECRET IS STRETCHING
“I believe that my arms have grown as big and quickly as they have because of how I stretch them,” Manfred says. “When most people work arms, they just pick up the weights and pump those reps out. I’ve found that the biceps and triceps must be fully stretched out before, during and after the workout if you really want them to grow.

“I’ve found numerous ways to stretch the triceps and biceps. A good one for triceps is curling your arm up like you’re doing a dumbbell curl (without any weight), and supinate the wrist way out to your side, holding it there for a few seconds. For biceps, I like to bring my arm straight down to my side, turn my palm out away from my body and hold my arm in the fully stretched-out position for at least 30 seconds. I believe that if you add arm stretching to your routine, you’ll be amazed at the results.”

Never stretch a cold muscle. Get the body warmed up with a few minutes of light cardio work first. Follow that with a few light sets.

STRONG-ARM ADVICE FOR BEGINNERS
“When I started training, I tried nearly every exercise imaginable,” says Manfred. “I usually did four biceps and four triceps exercises for 12-15 sets each bodypart. My arms grew, but not quickly.

“As the gains came slower and slower, I decided to do a little experimenting. I cut back on the number of exercises and sets, and I raised the intensity level. Where before I was doing 12-15 sets, now I was doing six! The results were amazing.

“My arms exploded with new growth. Never before had I experienced such phenemonal results. Yet, I took things one step further: I increased the number of rest days and eventually got to the point where I was working my arms only once per week. And, my biceps and triceps workouts now take only 10 minutes!

“In my hunger for big arms, I thought more work and workouts were the answer. I was wrong. When it comes to massive, unbelievable arms, less is more!”

Please allow me to introduce myself. My name is Manfred Hoeberl. I am a professional strongman. I am 6’5″, weigh 330 pounds and have the largest arms in the world at 25 1/2 inches. It is a great pleasure to be writing this letter to you.

F or many years I have read your magazines and followed the Weider Principles. It is thanks to you and your publications that I have been able to learn so much about bodybuilding and achieve the tremendous size I have. I look forward to meeting you in person.

UNCONVENTIONAL BODYBUILDER’S DIET
“I’m presently eating 6,000-8,000 calories per day,” says Manfred. “I have a very fast metabolism and if my caloric intake drops below 6,000, I start losing size.

“I eat a lot of carbohydrates and a moderate amount of protein. I do try to keep my fat intake low, however, I like hamburgers, fries and a good cake occasionally. I basically eat whatever I want. I don’t think it’s good for the body to have rice, potatoes and chicken all the time. Your body becomes so sensitive to other foods that you can’t really enjoy all the wonderful foods that are available.” CAN YOU SEE THIS GUY IN THE MOVIES?

“One of my big dreams is to be in the movies,” says Manfred. “I’ve always loved acting and I think I would do very well at it. Right now, I’m committed to doing some strongman competitions throughout the world. However, after that, I’d like to develop my acting career. I think I could stand out and be easily recognizable.” [Editor’s note: With this guy’s body, that has to be the understatement of the year!]

MANFRED-SIZED ARM ROUTINE
BICEPS
SEATED INCLINE DUMBBELL CURL
“I prefer using a slight incline because it allows me to minimize any shoulder involvement,” says Manfred. “I concentrate solely on good form and make my biceps work to their maximum capacity. That means starting each movement from a dead stop at the bottom and keeping the elbows stationary, curling the arm up to full biceps contraction.”

THUMBS-UP ROPE CURL
“This is a great exercise for developing the biceps brachialis -the muscle that sits underneath the biceps. I’ve found that using a rope helps me feel the movement better simply because there’s constant tension on the brachialis throughout the entire movement. Proper form is a must, as are slow, continuous burning reps.”

EZ-BAR CURL
“For mass building, the EZ-bar or straight bar curl can’t be beat, which makes it one of my favorites. I make sure I do a few light warm-up sets and then I go for the heavy weight. I like using a close grip on the EZ-bar.”

TRICEPS
V-BAR PRESSDOWN
“This a power movement for me,” Manfred says. “I take a V-bar and face away from the machine. I lean over slightly to keep the stress off the lower back. I make sure that my tendons are fully warmed before I start piling the weight on. I also make sure that my upper arms are locked into a fixed position, then I bring the bar up to chest level and down to the fully contracted locked-out position.”

SEATED ONE-ARM DUMBBELL FRENCH PRESS
“This exercise does amazing things for triceps long-head growth. Very strict form is critical to get the most from the exercise. I use heavy enough weight to make the triceps burn but not cause me to use sloppy form. For the last few reps, I’ll take my free hand and push the dumbbell up just enough so I can complete the rep.”

Manfred begins the next three-day training cycle on Friday, using only light weights (that is, light for Manfred!) and really has fun trying new movements.

PULL QUOTES
‘To give you an idea of just how big Hoeberl’s arm is, picture an average bodybuilder’s thigh. Wrap a shirtsleeve around it, and that’s the size of Manfred’s arm!’

‘I did a demonstration on a television show in Europe where I turned over 10 cars in three minutes and 20 seconds.’

‘In my hunger for big arms, I thought more work and workouts were the answer. I was wrong. When it comes to massive, unbelievable arms, less is more!’