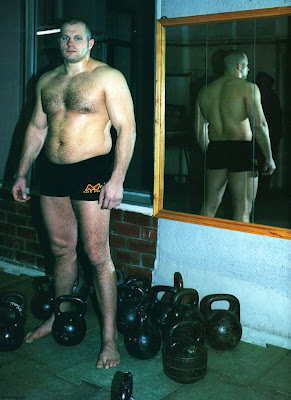 Check the results then discuss the study. Years ago a study showed that HIT on Nautilus machines did not fit well into what was defined as aerobic exercise (failed). The HITTER’S discussed and complained, but no real conclusions were arrived at. Let’s see where this leads regarding kettlebells.
Cardiorespiratory Responses to Kettlebell Training Exercise
Medicine & Science in Sports & Exercise. 37(5) Supplement:S219, May 2005.
Bishop, Emmett; Collins, Mitchell A. FACSM; Lanier, Angela B.

(E. Bishop, Dragon Door Research Grant Recipient.) <------- Although resistance training using Kettlebells™ is not new, the popularity of Russian Kettlebell™ training has recently grown in the U.S. due to promotion by Pavel Tsatsouline. However, at the present time there appears to be little scientific literature on Kettlebell™ exercise. PURPOSE
Therefore, the purpose of this study was to describe the cardiorespiratory responses to a typical 30-minute bout of Kettlebell™ training.

METHODS
Five males and five females (24-58 yrs) were recruited to participate in the study. Each performed five sets of ten repetitions for three Kettlebell™ exercises each separated by 1 minute of rest. The exercises consisted two-arm swings, one-arm snatches (half performed with each arm), and one-arm clean and presses (using right and left arms). The females used a 4 or 8 kg Kettlebell™ based on strength and the males used an 8, 12, or 16 kg Kettlebell™. The cardiorespiratory responses to the exercise were measured using a Parvo Medics TrueMax™ 2400 metabolic system. The data were analyzed using simple descriptive statistics.

RESULTS
The cardiorespiratory responses varied greatly among the subjects and were related to the size Kettlebell™ each used. After the intial adjustment to exercise, ventilation (BTPS) ranged from about 24-39 L/min. This corresponded to tidal volumes and respiratory rates from 0.9-1.4 L/br and 24-41 br/min. Oxygen consumption values were from 0.65-1.28 L/min or 9.7- 18.0 ml/kg/min. Respiratory exchange ratios were from 0.88-1.07 with values typically below 1.0. Exercise heart rates were found to be between 101-143 bts/min and mean (±SEM) blood lactates following exercise were 4.3±1.8 mmol/L.

Kettlebell training is a relatively ancient form of strength training that has been highly regarded among the Russian military and Eastern European power lifters for many years. Most recently, it has gained popularity among athletic strength coaches and recreationally active individuals as a novel way to enhance functional strength and positively impact cardiovascular endurance. However, to our knowledge this form of training with handheld weights has not been systematically investigated.

PURPOSE
The purpose of this pilot study was to assess the energy cost and intensity of a basic Kettlebell training protocol.