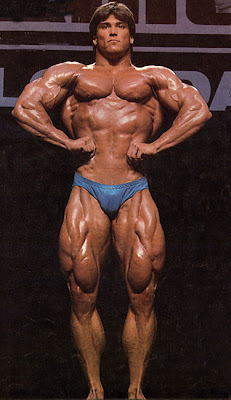 The almost mythological Jeff King performed an exercise for his legs called “Ducks”. King came and went and people still remember him in awe. He was the 1983 Mr. America and went on to win the NABBA Tall Mr. Universe. His thighs may have surpassed Tom Platz. To get this incredible degree of unusual development Jeff used to get on a 45 degree leg press and keep his knees wide like a plie’ and slowly press the weight forcing his thighs together rather than simply locking out the knees. The name, “ducks”, does not come from adductor development, but from the position forcing the legs wide like a ‘duck’. He was also rather innovative with other training. He claimed to have rather stingy trapezious development so he focused on his neck. Many of todays athletes could take a lesson from this.