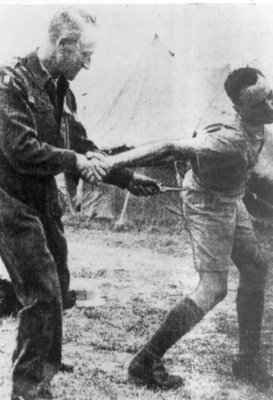 William Fairbairn is the father of combatives. He in some ways is responsible for the distillation of complex fighting arts and making them modular, simple, and easy to convey to our fighting forces. His material was good years ago, and it is good now. He studied both Jiu Jitsu and Chinese Martial Arts. He was a Royal Marine and a member of the Shanghai Police Force. He had over 600 encounters outside of training. He based his Defendu art on what worked and what did not work during these scuffles. He was recruited by British Secret Service and trained many, many, military teams in all facets of close quarter combat. You can hardly go wrong studying these methods. Here is a pdf of his book, Get Tough!