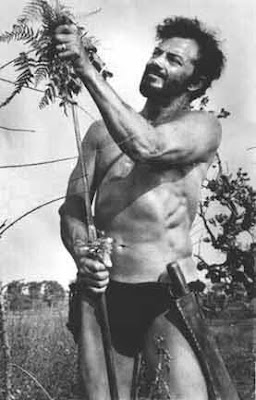 Cornel Wilde received a scholarship to Medical School and an invitation to the 1936 Olympics as a fencer. He made a bad decision to go into acting. He coached Sir Lawrence Olivier in swordsmanship, and after that had a fairly average career. Two exceptions were his self made film, “Naked Prey”, and the TV movie, “Gargoyles” (cult classic for sure).
The Naked Prey was a true story about an American in the old West. Production costs forced this film into South Africa. It is one of those movies you stay up late and enjoy. Not a chick flick. Below is a foreign music video using clips from Naked Prey. Here is Cornel’s BIO