Buffalo. Eat Some. Here’s Why. 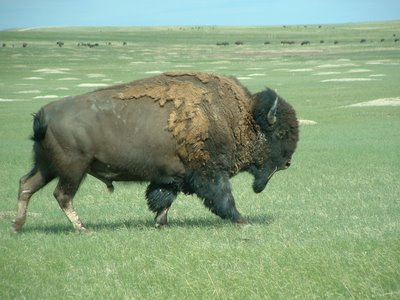 “Today, we know that the bison is considered a highly nutrient dense food (the proportion of protein, fat, minerals and fatty acids are high when compared to its caloric value.) When compared to other animals from a feed lot, the bison have a greater concentration of iron as well as other essential nutrients. The meat from grass-fed bison can contain up to four times as much vitamin E as feedlot cattle. This potent antioxidant has been shown to lower the risk of heart disease, cancer and Alzheimer’s disease.

The fat content in bison meat is usually a third of that found in cattle fattened in the feedlot. Because the meat is lower in fat also means that it is lower in calories. A 6 oz buffalo steak can have as much as 100 fewer calories than a steak from a grain fed steer. You could loose up to 10 pounds a year just by switching your main source of meat to grass fed buffalo.

Bison is also high in omega-3 fat. Up to sixty percent of the fatty acid content in the grasses on the plains contain omega-3 and are found in abundance in buffalo allowed to graze on the natural grasses. The benefits from a diet rich in omega-3 fatty acids can not be overstated. These benefits include cancer prevention to lowering cholesterol as well as reducing inflammation.”
Dr. Kevin Weiland