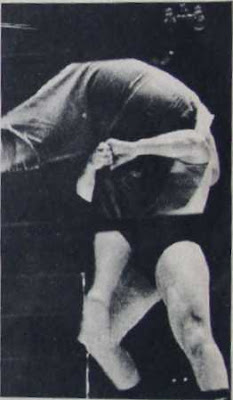 TRAINING WITH A LEGEND – Bruno Sammartino

Posted on NaturalStrength.com on November 29, 1999

Since I first started my weight training in 1944 there was one movement that I love to do more than any other….the wide grip bench press.

I was fortunate enough to have trained with one of the world’s strongest men….Bruno Sammartino. For many years Bruno trained at my gym in Manhattan while he was a professional wrestler. The only exercise I did with Bruno was the bench press, which was also his favorite movement.

We would try to get in benching three times per week. We did the pyramid system. In all we would do ten sets. First two sets we used a weight we could do around twenty repetitions, then increase that weight on the next three sets so that we could do no more then eight to ten reps. Once a week on the sixth set we would do a maximum weight effort for one rep. Then slowly decrease the weight and on the 10th. set we would go all out for repetitions.

You must realize that Bruno was wrestling just about every night and doing a lot of traveling. He wanted to keep his strength up – but also most important to him was his endurance in the ring. In those days going thirty to forty minutes in the ring with someone like Killer Kowalski (who was know for his endurance) would totally drain you, you had to be able to endure – hence the reason for the many sets and reps.

Whenever I finished a workout with him I felt that my pec’s were going to burst, it was great. One day we had a contest for most repetitions between the two of us. Bruno weighed around 250 and I was 167. He would bench with 330 for most reps and I would use 220 for my reps.

I went first….and only because he was there pushing me on I was able to get out 24 reps with the 220.

Bruno started with his 330….when he reached 20 repetitions all the members came over to watch this strongman do his thing. Then he reached 30…..he looked and sounded like a locomotive…..34….35….36….37….38- THIRTY-EIGHT repetitions with 330 pounds. Mind you, he wrestled the night before in Philadelphia and that morning drove into Manhattan. Bruno’s best one rep was 565, if he wasn’t wrestling I know he would have been the first to do 600lbs…(NO DRUGS, EVER) This all took place at the Mid- City Gym in 1968.