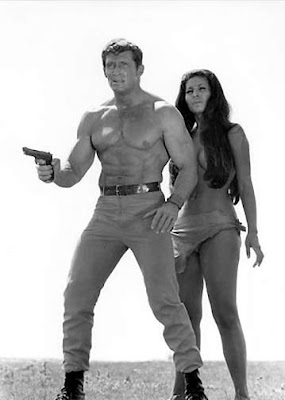 Brad Harris broke into acting doubling for Richard Jaeckel. He later moved on to sword and sandal epics. He had a head for moviemaking and made many, many, action adventure movies in Europe. He would often buy a weight set and keep it in his hotel room to train after 12 hour days of shooting. When he was done he would instruct the locals on the basics of exercise and leave the training equipment there. He has done this all over the world. He adapted his strengthwork to include sprinting in the sand and on his bike. He always includes some form of clean or high pull in his training as well. Here is his page on Brian’s Drive In. HARRIS