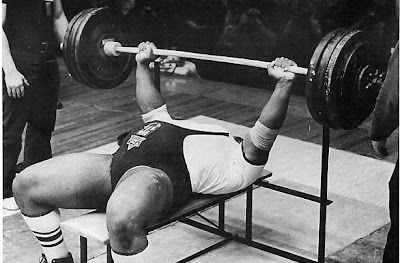 Weightlifter ‘Chimesy’ Williams dies
BY DONNIE COLLINS
STAFF WRITER
01/24/2007
email this storyEmail to a friendprinter friendlyPrinter-friendly
James “Chimesy” Williams, a mammoth Scranton man who captured the city’s attention in the 1970s and ’80s with a prolific weight lifting career and a checkered life away from the gym, died Tuesday.

Powerlifting became a hobby for Williams in 1966; by 1968, it had become a passion. Not long after California police officer Pat Casey became the first powerlifter to bench press 600 pounds, Williams topped that. During a competition in Bordentown, N.J., in 1971, he pressed 661 pounds — beating the world record of 655 he had set earlier in the day. He also squatted 860 pounds that day.

He would press 675 in 1973, the official world record and more than twice his own body weight. In an unsanctioned lift while working out with the U.S. Olympic Weight Lifting Team, he pressed 705 pounds. Ultimately, he’d press 720 pounds, an unofficial record that stood for more than 19 years.

“It’s the only thing that’s ever gotten me motivated,” Williams said in 1986.

Williams became as well-known in the courtroom as he did around the nation as a powerlifter.

Williams admitted to playing part in the beating and robbery of a man in 1961, when he was 21. He, another man and a 17-year-old took $80 and a wristwatch. Williams was sentenced to five to 10 years in prison.

It was only the beginning.

A decade later, the U.S. Secret Service charged Williams with counterfeiting, alleging he and a group of men printed and sold — or attempted to sell — $5 bills. He ultimately was sentenced to two years in prison.

In 1981, he was sentenced to five years in federal prison after his conviction on Social Security fraud charges. Before that trial, city police arrested him on cocaine trafficking charges. Early in 1982, a jury acquitted him on four drug-delivery counts, but did convict him on one count each of possession of a controlled substance with intent to deliver and criminal conspiracy.

In all, Williams spent 11 years of his life behind bars, where he was presented with humanitarian awards for establishing inmate weightlifting programs.

In 1986 — just before his release from prison — he announced that he was a born-again Christian. He became active as an elder in the Bethel AME Church and spent the last two decades of his life in relative anonymity. By 1993, he had begun his third existence — as an author. He penned the book “Northern Fried Chicken,” a self-described historical adventure into Scranton’s black com-

munity. Williams said he decided to write the book as a legacy to his children, but it became a greater calling when he and a neighbor searched for background of Scranton’s history at the public library and found only three paragraphs about the black community.

Williams said he hoped that by writing the book, the struggles of the black community would be understood better. He also hoped it would help him be remembered more for his writing and weightlifting than his criminal history.

“I turned my life around years ago,” Williams said in 1993. “Who am I that I can’t do something wrong? We’ve all done wrong. I did wrong, and I paid for it.”