A Warrior Is Gone 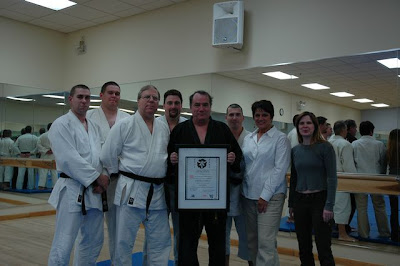 Jim Tirey is gone. Here is his resume. Below is a piece written by Dylan Thomas. A lifelong martial artist, Strength and Conditioning Coach, and student/friend of Jim.

I just got a call from Sensei Lamond, the news was a complete surprise and has left me pretty numb at the moment.

My Sempai, a good friend and mentor, Jim Tirey, has passed on.
He died in his sleep aboard an Airliner, on a buisness trip. Jim was 54 years old.

Jim was an amazing and accomplished man, born in Bermuda (His Dad worked for the USAF there) moved to California, attended West Point, and UC Davis ( He told stories of being the only guy not on Dope at the Filmore in SF) Jim joined the US Army, Attended Jump and Ranger school, became an Infantry Officer, and was later all but drafted into Special Forces. ( It was a funny story)

Jim has done alot of Spec Ops work from the late 70s untill his retirement right before 9-11-01.

I have met many of his contemporaries and in that small world, Jim is a legend.

Jim was a Hell of a Martial Artist, Having boxed in College, done Shotokan, trained in multiple Korean arts, in Korea, plus his cross training in FMA, IMA, and other arts. He was the senior student of Icho Yama Ryu Aiki Jujutsu Quantico Kai.

Jim was a real good friend, I will straight up say, if it were not for Jim Tirey, my life would be very different, and not as good. He taught me alot beside Martia Arts, He showed me barring, principle, integrity, kindness, strength, and reason, Jim was 1-10,000,000. He lived exactly as he spoke, no variences that I or anyone else has ever seen.
He had a great sense of humor and after retirement, he came out of the Colonel stiffness, into a fairly gregarious fellow.

I will miss him very much, there was so much more to learn from him, I must hold onto what I have. He ranks up there with my Father and Step Father as far as mentors go, at my age, he was my last.
My 1 consolence is that I believe you get what you think you get when you die. If you die with a good conscience, and you believe in Heaven, there you are.
Well Jim is in Heaven now, with his Father, Mother and Older Sister and many of the faces of old friends smiling at him.