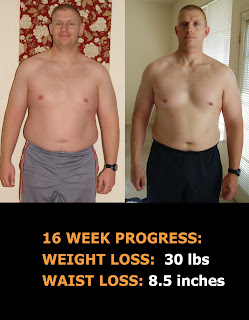 “M” is  a Senior Airman with the 460th Space Wing (Intel Analyst). He had attempted, as a desk jockey, to get back in shape with the latest exercise fad. It involved knee socks and gin, tattoo’s and Kool aid. The diet suggested consisted of caveman food. “M” ended up with injuries and frustration. He had a problem, an upcoming Air Force Physical Training Test. He contacted Tom Furman Fitness for answers and results.

“M” averaged a weight loss of around two pounds per week and passed the PT test with flying colors. His waist reduced on average of half an inch per week as well. Results, not hype. He’s just getting started. He will be promoted to Staff Sergeant as of June 1st. Then off to Ft. Bragg, North Carolina. “M” will be with the JSOC Intel Brigade.

“JSOC is designed as a common command structure between Army, Air Force and Navy Special Operations elements. As can be deduced from its subordinate units, JSOC’s current focus is thought to be towards counter terrorism. JSOC is a component of United States Special Operations Command (USSOCOM or SOCOM)”
From out of shape, desk jockey to counter terrorism is not too bad.
I’ve never met “M” in person. We’ve only had a training relationship with email and phone. If you are interested in results like this, please feel free to contact me. Congratulations to “M” and he and I both look forward to his continued results. I will be posting update pictures in June.